The Treasure Hall of Great Strength is dedicated to the historical founder of Buddhism, Shakyamuni Buddha.

This statue of the Shakyamuni Buddha has the mudra (hand gesture) of calling upon the Earth to witness his complete Enlightenment and his victory over Mara, a demon who delights in sensual pleasure and seeks to have others indulge in them as well. The Unisha or protuberance atop the Buddha’s head is symbolic of the Buddha’s perfect Wisdom.

Shakyamuni Buddha was born in Northern India more than 2,600 years ago as Prince Siddhartha Gautama. At the age of 29, out of compassion for all beings, he chose to renounce the royal life in search of Enlightenment. After he attained Enlightenment at 35, he taught the Dharma for 45 years before passing into Final Nirvana at 80 years old. His life was full of inspiring events of how he touched people from all walks of life with his perfect Wisdom and Compassion.

In the Chan lineage, Venerable Maha Kashyapa is seen as the lineage master after the Buddha while Venerable Ananda is the second lineage master. As KMSPKS is in the Chan lineage, the images of these two Patriarchs are placed on both sides of the Buddha. The Chinese character, Chan 禅 is an abbreviation of 禅那, which is a transliteration of Jhana, a deep tranquil meditative state. When introduced to Korea and later Japan, Chan was in turn transliterated as Zen.

Maitreya Bodhisattva, better known as the “Happy or Laughing Buddha”, is represented by the image of the historical monk, Bu Dai who is commonly depicted as carrying a cloth sack. As with all Buddhist art, the qualities of all Bodhisattvas and Buddhas are visually and artistically depicted. Maitreya is portrayed with a huge belly representing great and broad-minded magnanimity and equanimity of mind to teach us to treat everything and everyone with generosity, patience and serenity.

Shakyamuni Buddha stated that the next Buddha of this human world would be Maitreya Buddha. “Maitreya” means “one who possesses loving-kindness” as he willingly grants help to all who direct their minds towards him. Having honed the perfections, Maitreya now awaits the conditions when it will be suitable for him to be born in the human world and teach the Dharma for the good of many. Meanwhile, he resides in the Tushita Heaven.

At the back of the Treasure Hall of Great Strength are the Three Enlightened Beings of the Western Pureland: Amitabha Buddha and his two disciples-cum-attendants, Avalokiteshvara Bodhisattva (Guan Yin Pu Sa) on his left and Mahasthamaprapta Bodhisattva (Da Shi Zhi Pu Sa) on his right.

The Buddha gave many teachings showing the way to Enlightenment, including the practice of attaining birth in the Western Pureland, where greed and hatred, which arise from our ignorance and obstruct us from attaining Enlightenment, are absent. The three essential conditions for birth in the Western Pureland are: Confidence (Faith), Aspiration (Vow) and Practice (Remembrance or Recitation of Amitabha Buddha’s name). In the pureland, one will become an enlightened Bodhisattva.

The Western Pureland is presided by Amitabha Buddha whose most famous vow is that as long as someone chants his name up to ten times single-mindedly before dying, he would receive this person into his pureland, provided the deceased has had the Right View; an unclouded, focused mind; with sufficient merits and wholesome roots. This teaching is seen as the easiest and most expedient path for the majority of people in this day and age.

To the left of Amitabha Buddha is Avalokiteshvara Bodhisattva (Guan Yin Pu Sa), who is the personification of Great Compassion, an attribute of all Buddhas (along with Perfect Wisdom, Perfect Vow and Perfect Practice). “Avalokiteshvara” means “One who regards the cries of the world.” Avalokiteshvara Bodhisattva is known for his vow to alleviate the suffering of any being who can be sincerely mindful of him. He is often featured holding a vase filled with the sacred “ambrosia” of the Dharma. There are many recorded incidents of his manifestations, in which he uses a willow branch to sprinkle it to alleviate suffering.

“Mahasthamaprapta” means “Arrival of Great Strength” (Da Shi Zhi) to free all sentient beings from suffering. He is often featured holding a lotus in his hand, which represents purity.

Flanking the left and right of the Treasure Hall of Great Strength is the Bell Tower and Drum Tower respectively.

In Chinese Buddhist temples, the Sangha starts the day at the break of dawn by sounding a bell, followed by a drum, 108 times each. This process is repeated at dusk in the reverse order. The bell and drum are also used for announcing special times throughout the day. It is said that when one hears the clear resonating sounds of the bell and drum, one’s troubles are dispelled, helping Wisdom to grow and develop. It also has the profound effect of inducing the thought of repentance for beings suffering in the unfortunate realms. 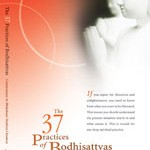 The 37 Practices of Bodhisattvas