Ullambana, falls on the 15 of the seventh lunar month each year, is also locally known as “Seventh Lunar Month” or “Hungry Ghost Festival”.  Buddhists participate  in the Ullambana Festival to make offerings to the Sangha of the ten directions. This is done to liberate beings of the three lower realms from suffering, so as to repay the deep kindness of parents.Thus, it is a celebration of Filial Piety by showing gratitude to our ancestors and departed parents.

According to the Ullambanapatra Sutra,  Ullambana is a transliteration of the Sanskrit word that means “deliverance from suffering”. It specifically refers to the liberation of tormented beings in hell by making offering with basin containing the five fruits of a hundred different taste to the Sangha of the ten directions.

“The 15th of the seventh lunar month is the last day of the rainy retreat and is filled with wholesome Dharmic joy. Out of compassion to liberate your deceased mother, use a basin to gather food of a hundred different tastes and offer it to the Sangha of the ten directions to accumulate immeasurable merits.

The merits coupled with the pure virtues of the Sangha of the ten directions, would not only liberate your mother but also the parents of all others from suffering.”

Finally, Maudgalyayana did as the Buddha had instructed and liberated both his mother and the parents of all others. This practice is known as Ullambana in Buddhism. 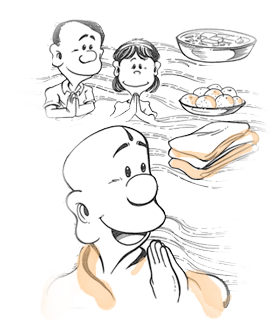 The primary ideology of this Sutra is to liberate the suffering of deceased parents through the merits accumulated by making offering to the Sangha. As the emphasis of this Sutra is filial piety, it is highly regarded by people. The first Ullambana Festival was held by Emperor Wu on the 15th of the seventh Lunar month, Datong fourth years (538), at “Tong Tai” monastery. During the Tang dynasty, the Ullambana Festival was popularised among the commoners. Till today, Ullambana is a part of Chinese culture. 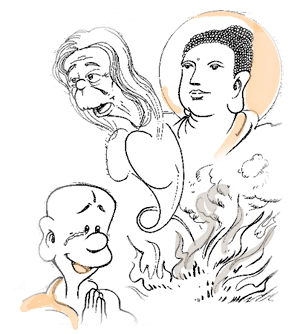 Buddhism has 6 realms into which beings can be reborn. These are: 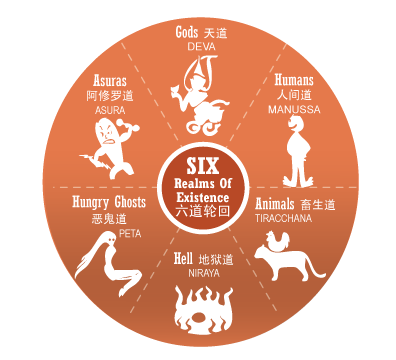 From 1st to 9th of the Seventh Lunar month. the monastery sangha would lead in the recitation of “The Sutra of Bodhisattva Ksitigarbha’s Fundamental Vows” and dedicate it to world peace, the deceased and the auspiciousness of those living.
于农历七月初一至九，本寺将启建九天《地藏追思报恩法会》，由法师带领大众念诵《地藏菩萨本愿功德经》，以祈世界和平，人民安乐，先亡得度，现眷吉祥。