The Hall of Great Compassion, symbolising the great compassion of Avalokiteshvara Bodhisattva[1] (Guan Shi Yin Pu Sa), was completed in 1980.

In the centre of the hall is the Avalokiteshvara Bodhisattva of a Thousand Arms and Eyes crafted in the traditional Indian style by Italian craftsmen. The thousand arms and eyes symbolise his immeasurable vow to reach out in all directions to save all beings who faithfully recite his name or call out to him for help. In each hand is an eye of Wisdom, which guides his Compassion in action. Avalokiteshvara Bodhisattva is known for his skilful means of appearing in whatever form in the different realms of existence that one who is suffering is inclined towards to provide relief.

Standing to the left and right of Avalokiteshvara Bodhisattva are Sangharama Bodhisattva (Qie Lan Pu Sa) and Skanda Bodhisattva (Wei Tuo Pu Sa) respectively, Dharma protectors who vowed to safeguard and protect the Buddha’s teachings and his followers.

Sangharama Bodhisattva (Qie Lan Pu Sa) is widely known as the legendary hero, Guan Yu or Guan Gong. According to the recorded biography of his life, he displayed nobility in character, righteousness, integrity, loyalty and bravery at a time of great upheavals and chaos during the Han Dynasty, 202 B.C.E. He is widely regarded as the Guardian Bodhisattva of the brave, loyal and righteous.

Skanda Bodhisattva (Wei Tuo Pu Sa), who holds a long sword, is always present in Buddhist monasteries and temples as the “Entrance Guardian”. He is the General-in-Chief of the 32 heavenly generals who come under the four Heavenly Kings. For his devotion to the protection of Buddhism, he has earned titles such as the “Protector of Buddhism”, the “Protector of Temples” and the “Protector of Dharma Books”.

Skanda Bodhisattva was the son of a virtuous Heavenly King who instructed the prince to guard the Dharma when Shakyamuni Buddha was entering Nirvana. Thus it became Skanda Bodhisattva’s duty to protect Sangha members whenever they are disturbed in their cultivation by the retinue of Mara, the evil ones. Whenever a conflict arises among religious sects, he will also discharge his duty to help bring about a peaceful settlement.

On the far left of the hall is Samantabhadra Bodhisattva (Pu Xian Pu Sa), whose name means “Universal Virtue” as he embodies the diligent practice of a Bodhisattva. He is accompanied by an elephant, which symbolises the Bodhisattva’s steadfastness and strength in the practice of the six perfections of generosity, morality, patience, joyful endeavour, meditation and wisdom.

Manjusri Bodhisattva (Wen Shu Shi Li Pu Sa), whose name means “Gentle Glory”, on the far right of the hall, is the personi­fication of the perfection of transcendent knowledge. He is known for his great wisdom in instructing Dharma practitioners and teachers. The lion he sits on symbolises his wisdom that is as far-reaching and authoritative as a lion’s roar.

[1] One who resolves out of Great Compassion to cultivate and strive towards Buddhahood, so as to skilfully guide and teach all sentient beings on the path towards unsurpassed Perfect Enlightenment. 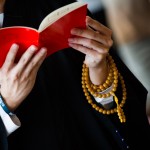 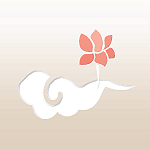